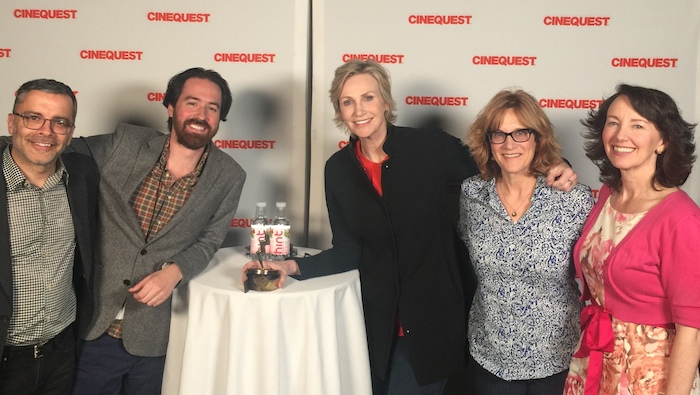 ‘Writer’s Block’ star Jane Lynch and writer Carol Leifer talk to Ruth Copland at Cinequest 2017 Maverick Spirit Award Celebration. They talk about women in comedy, what inspired the comedy ‘Writer’s Block’, and what it was like to work together. Jane Lynch is an an Emmy and Golden Globe award winning actress, know for starring in such films as ‘The 40-year Old Virgin’ and the hit TV series ‘Glee’. Carol Leifer is an Emmy nominated writer and stand-up comedian, writing for shows such as Seinfeld, Saturday Night Live, The Ellen Show, and The Academy Awards as well as frequent appearances on David Letterman, and Johnny Carson, she’s even opened for Frank Sinatra. James Costa, executive producer, and Ben Foster, award-winning director, editor and producer, talk about why they were inspired to get involved with the project.

Ruth Copland was invited to interview the panel by Cinequest co-founders Kathleen Powell and Halfdan Hussey. The conversation took place live on stage at the historic California Theatre, San Jose, California, in front of a packed audience after Jane Lynch received the Maverick Spirit Award during the film festival. Co-founder Kathleen Powell is a former guest of It’s A Question Of Balance Radio Show ®. The Maverick Spirit Award is Cinequest Film Festival’s most prestigious accolade, recognizing those who stand apart from the crowd, willing to create and innovate from a place of personal yet global vision. The Maverick leads, tries the difficult if not impossible, and delivers original work and an original life. Women and men of passion, Mavericks take risks and are willing to fall or fail on the road to eventual success and creation. This spirit sums up the best of the worlds of cinema and the Silicon Valley.