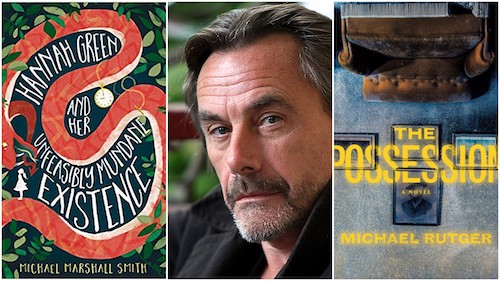 Michael is the winner of the Philip K Dick Award, the August Derleth Award for best novel, six British fantasy awards, and the only author ever to win the BFS Award for Best Short Story four times. Stephen King referred to Michael’s Straw Men trilogy as a ‘masterpiece….brilliantly written’ and Michael is currently working on developing ‘Straw Men’ for TV. His novel Spares was optioned by Stephen Spielberg’s Dreamworks, and his supernatural thriller The Intruders was adapted as a major BBC television series. As well as his many best-selling novels, Michael has also published nearly a hundred short stories. Born in Britain, he now lives in Santa Cruz, California, with his wife, son and two cats. His latest books are ‘Hannah Green and her Unfeasibly Mundane Existence’ published as Michael Marshall Smith, and the recently released Michael Rutger novel ‘The Possession’.