Topic: Out And About – Conversations on the Street about Questions That Matter: Spirituality and Religion: What’s the Difference? 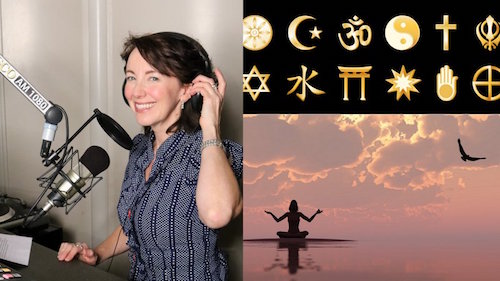 This week we consider ‘Spirituality and Religion: What’s the Difference?’ Point of View for the BBC says one in three Americans define themselves as spiritual but not religious. American sociologists Robert Putnam and David Campbell talk about “Nones” – people who belong to no religion but still believe in God. The Pew Research Religious Landscape Survey analysis in 2015 states “the number of religiously unaffiliated adults has increased by roughly 19 million since 2007. There are now approximately 56 million religiously unaffiliated adults in the U.S”. Yet “The share of U.S. adults who say they believe in God…[is] still remarkably high by comparison with other advanced industrial countries…at 89% and roughly six-in-ten adults now say they feel a deep sense of spiritual peace and well-being at least once a week, up 7 percentage points since 2007…and 46% of adults say they feel a deep sense of wonder about the universe on a weekly basis, also up sharply since 2007.” What is the difference between spirituality and religion? How do you define spirituality? Why is religious affiliation declining? The Pew survey found that about half of U.S. adults express reservations about the conduct of religious institutions, saying they are too concerned with money, power, and rules, and too involved with politics. Perhaps this could this be an explanation of the decline in religious affiliation even though most Americans agree that religious organisations perform positive functions in society. There are so many different religions and versions of each religion, might promoting spirituality over religion be helpful to break down barriers and connect people? 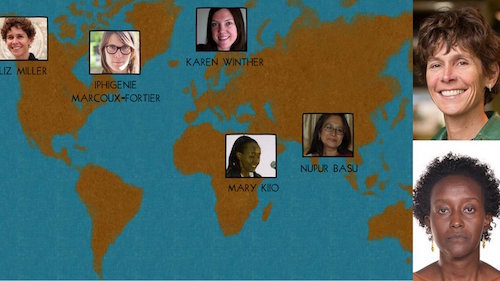 This week as her special guests from the arts Ruth Copland is pleased to be interviewing two of the directors of the documentary Hands On – award-winning film-maker Liz Miller in Montreal and first-time director Mary Kiio in Kenya. A collaborative project of the International Association of Women In Radio and Television (IAWRT), Hands On profiles five women from four continents tackling climate change through policy, protest, education and innovation. Hands On was broadcast on television in India and Kenya and screened at the climate talks in Paris.
Film-maker Liz Miller is a professor in Communication Studies at Concordia University in Montreal and an award winning documentary maker whose films and transmedia projects offer new and critical perspectives on gender, social movements and media. Her films, web initiatives, and media campaigns on such issues as water privatization, gender violence, and immigration have won numerous awards and been used in educational curricula around the world. Liz Miller teaches courses in media production, the politics of food and film, methods in research-creation, Latin American Film and more, and having lived in Central and South America collaborates with groups in the region providing training to human rights, labor, and women’s organizations in media production, digital storytelling, and media advocacy campaigns. Liz Miller is a board member of Cinema Politica and is an active member of the International Association of Women In Radio and Television (IAWRT) having served on the board for six years.
First-time director Mary Kiio from Kenya is committed to telling stories on democracy and governance issues to keep citizens informed on the change they can bring to their society. She is the Founder and Lead Consultant at Roshani Consultancy Services and is a broadcast media professional with 15 years experience working in and with various media houses and media development organizations. Mary Kiio is a trainer, facilitator, moderator and mentor with extensive experience in the areas of Online Safety for women, Conflict Sensitive Journalism, Democracy and Governance issues, Election Reporting, health journalism, Humanitarian media and disaster management, Road Safety, and Child Rights. Mary Kiio is also a freelance journalist and has authored a children’s book.